Regular readers will know that I spend a great deal of time talking about rights, particularly gun and marriage rights. But in the course of writing these articles and in discussing the concept elsewhere, I’m often asked where rights come from. There are several typical notions to answer that. 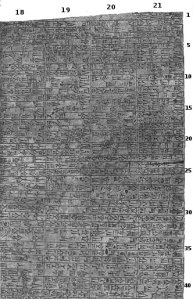 The Code of Hammurabi is one of the oldest codifications of law that we have. It’s stated purpose is to establish justice in the land. There is also a great deal of talk about the gods, but we’ll get to that later, and it’s not the main point of the Code. The idea here is that the law creates the rights of the people whom it governs. I hear that view expressed by those who tell me that I have no rights that the Constitution doesn’t grant me.

The problem here is that what the law gives, the law can take away. That makes rights essentially no better than privileges. Now certainly, a contract establishes rights held by the parties involved. And civil rights are those that we have by virtue of belonging to a given society. But if we apply that same reasoning to something like freedom of expression, we rapidly will end up in a situation where only such speech as our leaders accept will be tolerated.

The Magna Carta arises out of a tradition called common law. That came from the Germanic tribes of northern and western Europe that valued tradition and the agreement of people who were closely related to each other. The notion of a trial by jury is from the same tradition–in other words, a group of one’s fellows must agree on a verdict.

That isn’t unique to Germanic cultures–including English-speaking nations. The ancient Greeks had a similar idea, and there we have examples of how consensus can go wrong. Citizens who were lost popularity were ostracized. Socrates was executed after the public will turned against him. Consensus turns rights into a game of popularity.

This invokes images of Charlton Heston coming down the mountainside. It has the advantage of elevating rights out of political squabbles and implies a permanence to rights. But there are two problems:

If those rights are the will of a divine being, that makes them acts of capriciousness, rather than reason.

If rights come from God or one set of gods, what of people who worship other gods or no god at all?

John Locke was one well-known exponent of this idea, but it goes back to ancient thoughts of the Stoics and others. The concept here is that we are born with the power of choice. In a state of nature, we have no obligation to take anyone else into account. Living in a society creates expectations of restraining one’s actions for the benefit of others, but a fundamental core of rights always remains with each one of us individually.

The difficulty here is in determining the measure of restraint necessary. But as I discussed before in my first article on Eleutherianism, the principle here is the most liberty possible for everyone. We secure that by first determining whether anyone is harmed by an action and what is the minimum action to rectify or prevent that harm. A gay couple enjoying the benefits (and burdens!) of marriage cannot harm anyone outside that relationship and is, in fact, a good for society by making relationships more stable. Guns, alcohol, and marijuana are more problematic, but simple requirements like prohibitions against driving drunk or discharging a firearm randomly within a city can handle the potential wrongs. We’re often told that we can’t yell fire in a crowded theater, but that presumes that no actual fire is burning, and it ignores the fact that we don’t leave our tongues or brains outside the theater–though many filmmakers wish we would, seemingly.

The idea of natural rights is also connected to the belief in rights given to us by divine will, but not necessarily so. My argument is that we have rights by virtue of our being able to choose. In principle, it is not required for us to justify our actions. It is the burden of government or society to explain why our actions must be restrained and to beg our permission to do that. But fundamentally, government and the law should defend our rights before, above, and beyond all else.

More of my writing can be found here.